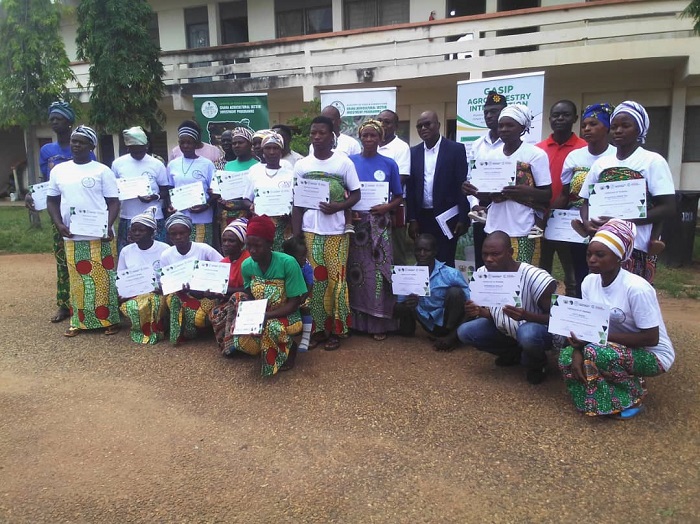 Ghana Agricultural Sector Investment Programme (GASIP) has graduated more than forty (40) farmers in the Jirapa Municipality of the Upper West Region who have been trained under the GASIP Agroforestry Project for eight months in nursery and grafting of seedlings.

The trainees were awarded certificates in Nursery Development, Grafting and Agroforestry.

The Climate Change Adaption Manager at GASIP, Dr Edmund Kyei Akoto-Danso speaking during the graduation and closing ceremony of the project said “combating climate related risk ensures environmental sustainability and GASIP is on course to make sure smallholder farmers are more resilient in relation to climate change”.

He called for commitment and support from stakeholders interested in restoring the environment such as farmers, District Assemblies, Chiefs, community leaders and other relevant Institutions to come onboard.

GASIP since its inception in the Jirapa Municipality has initiated several interventions including an automatic weather station at Tampoe, 12-acres fence field demonstration site in six communities, over 40 jab planters for farmers, slashers and knapsack machines and also two solar powered mechanised boreholes.

Climate Change Adaption Manager at GASIP, Dr Edmund Kyei Akoto-Danso said as part of GASIP’s effort to complement government’s Planting for Export and Rural Development (PERD) under the Planting for food and Jobs (PFJ), GASIP Trainees raised more than 400 thousand cashew seedlings and sold to government during the Green Ghana Day and gave some to private individuals.

These are meant to diversify sources of income for the farmers while improving and sustaining the local climate, leading to overall economic empowerment of the communities.

Dr Akoto-Danso said GASIP exists to reduce poverty in rural areas of Ghana with development objective of enhancing the profitability and climate change resilience of agribusinesses and small holder farmers.

He called on District Assemblies, Forestry Commission and other stakeholders to support the commercialization of the seedlings project by making the trained farmers’ nurseries their first points of call for their activities and recommend others to buy from them. This, he noted, will motivate the farmers to produce more seedlings and also try their best in protecting the environment against climate change.

Dr. Akoto-Danso appealed to interested parties to do the needful and take respective roles in the project so that the smallholder farmer will not be left out in the private sector tree crops production.

He mentioned cutting down trees without replacement, uncontrolled bush burning and some farming practices that do not enhance soil fertility.

This, he observed, causes biodiversity losses and must be stopped. He said this further leads to low crop yields to the farmer and water bodies with negative effects on socio-economic lives of the people.

The Upper West Regional Director of Agricultural, Emmanuel Sasu Yeboah observed that in 2019 there was a serious drought and the region also witness severe flooding in 2020 which washed away farmers’ crops. This he said is the effect of climate change and stressed the need for farmers to adopt and put to good use the training acquired from GASIP to protect the environment.

The Municipal Chief Executive (MCE) of Jirapa, Nicolas Soyiri, said one of government’s flagship programmes is PERD and in fulfillment of the programmer’s vision, the Assembly has not relented on its efforts to get cashew seedling for farmers for free.

Mr Soyiri believed it will enhance the income levels of farmers in addition to increasing their purchasing power and will create a sustainable raw material base for cashew industry.

The MCE noted that this will go a long way to increase the country’s revenue in the exportation of agricultural products.

Mr Soyiri described the GASIP trainees as subject specialists and assured them of recommendation to any organization that will need their services.

He commended GASIP and the project implementers for adding persons with disabilities and women who constitute greater percentage of the beneficiaries of the programme. Fifteen thousand cashew seedlings produced by the beneficiaries were purchased by the Jirapa Municipal Assembly for this year’s National Green Ghana Day programme.

Mr. Soyiri urged farmers to invest the money made from the sales of the seedlings so that the training received will be worthwhile.