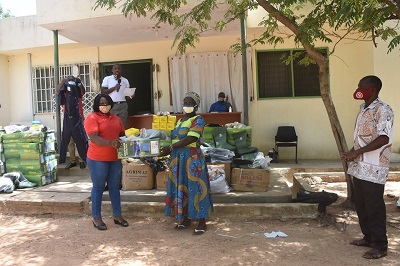 It was another great opportunity of presenting awards to one of the Assemblies in the Upper West Region, Jirapa Municipality, with a high adoption rate. Sixty-one farmers were presented with personal protection gear for farm activities including Wellington boots, nose masks, long sleeve and trousers, eye goggles, and knapsack sprayers. Once again, we were privileged to have the Municipal Chief Executive for Jirapa, Mrs Christine Bombanye-Amadu, who shared her childhood experience from Jirapa on how land preparation was mainly through slash and burn.

She was happy to notice the reduction in slash and burn practice of land preparation and attributed this feat to the works of the Ministry of Food and Agriculture through the District Department of Agriculture. She added “this is the time for those who doubted to believe that there is a reward in practicing what you are thought” and further thanked GASIP on behalf of the Municipal Assembly for the support to farmers in the area.

At Builsa South in the Upper East Region, the presentation was made to only the Best CA group as no farmer received an award.

Mr Sylvan Dauda Danaa, the District Director of Agriculture. on behalf on the farmers indicated that the challenges of the weather and other related issues led to farmers not receiving any award, and promised the team that there will be a total turn-around and the farmers in that district will be eligible for more awards by the end of this cropping season. The District Coordinating Director, Mr Mahama Mumuni Bukari, who represented the District Chief Executive, Mr Daniel Kwame Gariba, touted the capacities of the farmers and admonished them to work harder not only for an award but sustained food production for the District and beyond.